Ricardo Aguirre is an important figure in the Chicano community in Seattle, especially here at El Centro de la Raza. Born in 1937 in San Ysidro, California, Ricardo Aguirre moved to Seattle to attend the University of Washington on a football scholarship, the first ever Latino football player in the university’s history. However off the field, like other students of color attending the University of Washington at that time, he encountered isolation and discrimination. Aguirre became involved with other Latinos and activists and further embraced his Chicano identity. Ricardo Aguirre and Roberto Maestas along with others were instrumental in the formation of El Centro de la Raza. He was one of the original occupiers and continued to support the work of El Centro de la Raza throughout his life. One of his biggest passions was working with youth. He was involved with the Proyecto Saber program, an academic and cultural enrichment program in the Seattle Public Schools. He passed away in 2009.

Alejandro Canales, a Nicaraguan artist, was sent to El Centro de la Raza by the Nicaraguan government as an artist-in-residence in order to teach art classes to children and adults. He painted this mural during his time in the United States with the help of youth at El Centro de la Raza. He was an advocate for justice and human dignity for all people and used his artwork to reflect these ideas.

Canales believed in the vision of the revolutionary Nicaraguan hero, Augusto Cesar Sandino (1895-1934). Sandino fought to overthrow U.S. control of his country so that Nicaragua could be free. Canales himself participated in the Nicaraguan revolution on the side of the Sandinistas, a leftist guerilla group who named themselves after Sandino.

This mural shows Canales’ interpretation of Sandino’s dream for Nicaragua. On the left stands a woman holding a Nicaraguan flag and a second woman reading a book which represents the importance of literacy and education for everyone. On the right is a field of crops and a landscape filled with the famous volcanoes of Nicaragua as well as children, showing that they too are an important part of the future.

Although this mural might appear to be relatively harmless, some Nicaraguans thought the themes of his murals were too radical. For this reason, people have attempted, sometimes successfully, to destroy his murals.

When the Seattle City Council voted unanimously to adopt Managua as a Sister City in 1984, the IRD organized numerous delegations to Managua as a means of fostering cultural exchange and understanding. In the 1980s the media heavily politicized the Sandinista Revolution in Nicaragua and the dominant media narrative was one of dangerous communism, poverty and repression. These delegations were a way to provide a different perspective. The trips allowed people from the United States to see the reality of the country and its people firsthand, instead of through the lens of the media. El Centro de la Raza also hosted cultural groups and political leaders from Nicaragua here in Seattle. Many musical groups, artists and poets have passed through El Centro de la Raza, providing Seattleites with the opportunity to appreciate cultural traditions from other countries. While the IRD is no longer a formal department at El Centro de la Raza, we still educate ourselves and our community about the ways in which international struggles are intertwined in local struggles.

During our annual Dia de los Muertos celebration, the hallways of this building are adorned with dozens of ofrendas (offerings that honor those who have died). However, this large ofrenda for Roberto Maestas remains on display year round. It was created by the Rainbow Haven community in Tukwila to honor our principal founder and longtime director, Roberto Maestas.

Rainbow Haven is the name of a community of Latinos living in mobile homes in Tukwila. In 2009 the community came into conflict with the city of Tukwila and were threatened with eviction and homelessness because of permit issues and code violations. A delegation from Rainbow Haven came to El Centro de la Raza to ask for help. This beautiful community had a powerful story to tell about their struggles and El Centro de la Raza merely had to facilitate meetings with Tukwila city officials in order for them explain their situation and come up with a solution. Thanks to help from El Centro de la Raza and volunteer support, Rainbow Haven was able to bring their homes up to code in less than seven months. A relationship that began out of crisis has become a one as close as family. El Centro de la Raza continues to support the residents of Rainbow Haven in whatever challenges they encounter. 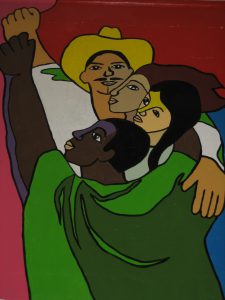 This mural makes a powerful statement about the solidarity among the workers of the world, including men and women of all races. It was painted above what used to be the International Relations Department at the time El Centro de la Raza was founded. As the “Center for People of All Races” this mural provides a visual image of the values of El Centro de la Raza and the continued struggle for civil and human rights of all people. The artists of this mural include Sharon Madea, Mayumi Tsurukawa and other members of the Seattle Third World Women Coalition. This group of women advocated and organized around the oppression of women of color and this mural was a part of their efforts to engage with community-based organizations.

This mural was painted when El Centro de la Raza was home to the offices of the American Indian Movement. The artist, Roger Fernandes painted this image with inspiration from an old photograph of a Native American man and used bright colors to create a positive image in the office of this inspiring movement. 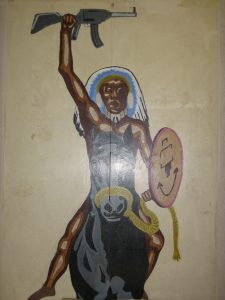 This mural was painted with help from the Chicano Education Project (no longer in existence) by the Native American artist and famous political prisoner, Leonard Peltier. Peltier painted this mural during his time here in Seattle before his arrest and the conviction for the murder of two FBI officers on the Pine Ridge Indian Reservation in South Dakota. Due to the suspicious legal proceedings that followed, Peltier’s case serves as an example of corruption and racism in the U.S. criminal justice system. Leonard Peltier is currently the longest held political prisoner in the United States.

The mural depicts an image of a Native American warrior on horseback holding an AK-47. This image emerged as one of the most dramatic symbols of the 1973 occupation of Wounded Knee. Roberto Maestas, Estela Ortega and David Silva, key members of El Centro de la Raza during its early years, were present at Wounded Knee. It is a political statement about the continued struggle of Native American people to achieve self-determination.

The life of Frances Martinez, the namesake of our Community Service Center, exemplifies El Centro de la Raza’s spirit of service and dedication to the community. A former farmworker, Frances Martinez, came to Seattle and began volunteering at El Centro de la Raza. She and her husband, Samuel Martinez, were both instrumental in the growth and evolution of the organization. During her time at El Centro de la Raza, Frances worked with Latinos in a variety of programs including employment, housing, emergency food programs, skills classes and legal counseling–all while raising nine children . Tragically, at a young age, Frances was diagnosed with leukemia. Still, despite being terminally ill, Frances continued to help others at El Centro de la Raza for 8 months until she died in 1983; she was only 37 years old. Before she passed away, many employees wanted to honor her work by naming the community services center after her. Always a humble woman, Frances initially shied away from this recognition believing that her contribution was too minimal. Eventually she was convinced that she more than deserved this honor. Her incredible story of sacrifice and service to the community continues to inspire the daily work of El Centro de la Raza.